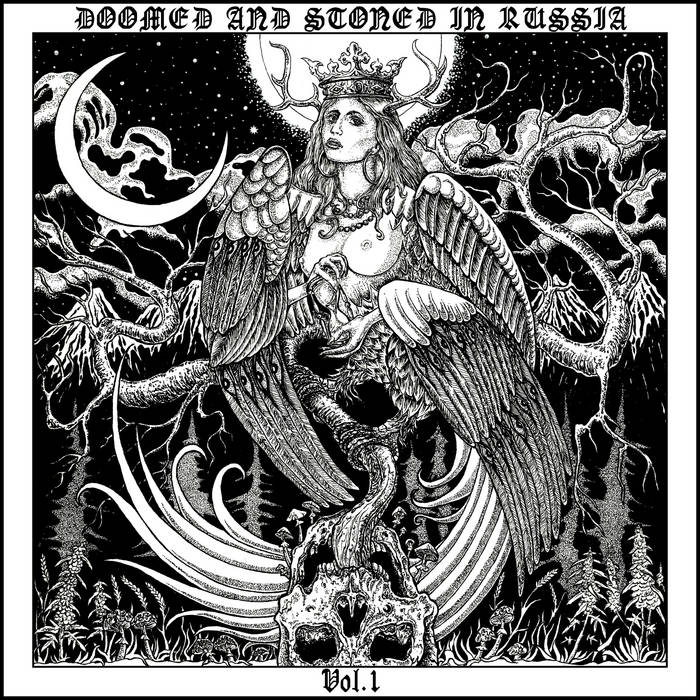 doctor_face Lots to explore. I'll get back to you.

XUN Russia is huge, so many bands I haven't even heard of.. But some of them I've already seen live. Anyway, due to this comp I could discover some more good music :) Favorite track: First Sun of the New World.

DOOMED & STONED IN RUSSIA:
An Introduction To The Scene

With prevalent cold weather and a rich history from per-christian folklore to the existentialism of Russian literature and the avant garde art movement of the 1920s Russia has a solid cultural background from which new forms of post-modernist art began to grow. Rock music in general began to shape itself in Russia in the late 1970s. But doom metal came into the country's counter-culture in the very late 1980s.

The first few bands at that time played slow Sabbath-sounding heavy metal and epic doom, were not popular yet, but were on a way of becoming a foundation for the early doom-cult. When the '90s began russian doom-death and Gothic doom appeared. The scene was populated by the bands and projects inspired by the gloomy sounds of the european doom-death mainly linked to the Peaceville Trio sound. It was in the later half of the 2000s, when the more traditional sabbath-influenced sounds of stoner and sludge became part of the scene.

In present times the scene is still divided into the more doom-death sounding bands, and also the Sabbath worshiping zealots of true doom, and everything in between — from Gothic doom's mournful vigils to the dirges of the funeral doom bands.

The compilation our team had put together for the grand Billy Goate's Doomed & Stoned series is a documentation of the Russian doom scene in all its glory past-present and future. Some bands on this compilation are the veterans of the doom metal movement dating back as early as the late 80's, and some bands formed a few years ago.

The diversity and the honest energy of this music is present in both the more melancholic tracks and the raw doom blues of the traditional doom bands. Russian doom is many things – Gothic, psychedelic, cold and energetic. The existential themes present in Russian culture carried across to the lyrics of many of the songs.

The compilation would not be possible without the outstanding cover art by Alexey Sivitsky (IG: godlikeikons), depicting the Gamayun bird (a mythic creature of Russian folklore), sitting on a skull. The cover perfectly fits the atmosphere of the compilation, which includes bands from all over Russia from Moscow and Saint Petersburg, Yaroslavl to the cold lands of Siberia and other regions.

We hope that this compilation will introduce the audience to great new music.

Russian heavy music fans have long been known as some of the most passionate and dedicated in the world. I first became aware of the heavy underground scene through a Kostroma-based band called Pressor, who had released a split album between Ukraine band Soom and Idaho's Diazepam in December of 2013 on the [addicted label], just six months after Doomed & Stoned was founded.

Soon, I found myself with a profile on VK (Russia's premiere social media site) and gradually making friends, including photographer Rita Fevraleva (vocalist of Fuzzthrone), whose photography captured the fervor of the Russian concert scene.

Doomed & Stoned was among the few Western music websites to cover such events as the annual Sludge Convention in 2016 and have been on top of the scene ever since, including documenting the first appearances of Elder, Acid King, and Eyehategod in Moscow.

And the rest is history.

Big thanks to all the bands who have participated in this effort to capture a snapshot of the scene. Listeners who enjoy the music should click the "info" link next to each track for details on how to follow the bands and purchase their music.

A huge debt of gratitude is due to the dynamic team of Anton Bryukov, Anton Kitaev, Alexey Kozlov, and Alexey Sivitsky for helping me through every step of the process in putting together this one-of-a-kind, herculean effort.

Thanks to you, the loyal listener, for your ongoing love and support. The compilation series, now in its 6th year, aims to document the groundswell of growth in the heavy underground, among both signed and unsigned bands, with the common denominator being their stylistic link back to the fathers of doom and the godfathers of metal, Black Sabbath.

Bandcamp Daily  your guide to the world of Bandcamp

Featured sounds from Fly Lo and Ahmed Idris, plus Mother Nature hops on to drop off new project